Learn where to find primary sources and how to contextualize them.

This page is designed to help you:

What Is a Primary Source?

Primary sources are immediate, first-hand accounts of a topic, from people who had a direct connection with it. They include printed, manuscript/archival, audio/visual, and born-digital materials such as diaries, newspaper articles, tweets, or oral histories.

For more information on distinguishing between a primary and secondary source:

There are many fantastic, public, online collections of primary sources, from library repositories covering a broad array of resources to curated collections of material focused on a particular topic. A few good places to start include:

Some of their collections that might be of interest

The New York Public Library Digital Collections has a search bar for keyword searching. There is no “advanced search” option, but researchers can filter the results of their search in a variety of ways, including by topic, name, collection, place, and genre, as well as by entering a date range.

When analyzing a primary source, some useful "framing questions" to ask are:

Let's take a look at the below primary source. This item is from the New York Public Library's Schomburg Center for Research in Black Culture, Manuscripts, Archives and Rare Books Division. 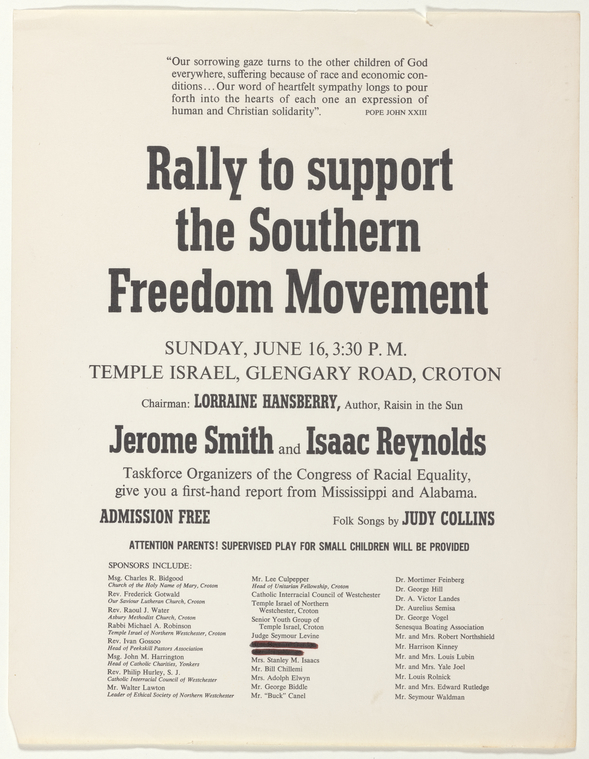 To help us analyze this record, we'll use framing questions:

This record is a combination poster and program for the Rally to Support the Southern Freedom Movement, which took place in Croton, New York on June 16, 1963.

When was it created?

According to the poster and the metadata (or additional information) provided by the New York Public Library, this rally took place on June 16, 1963. This means we can safely guess that this combination poster and program was created right around that time, probably at some point in early June 1963.

Who was the intended recipient or audience?

We know the Rally to Support the Southern Freedom Movement took place in 1963, which was during the Civil Rights Movement. We can also learn from this poster that Lorraine Hansberry, the famous playwright who wrote A Raisin in the Sun (a play that deals with racial discrimination and segregation in Chicago in the 1950s), was the chairperson, and that the rally’s two speakers — Jerome Smith and Isaac Reynolds — were task force organizers for the Congress for Racial Equality.

All of these things help us to contextualize this poster, as well as the poster’s intended audience.

We can infer that the intended audience was people who supported the Civil Rights Movement and who would have been interested in attending this rally. Additionally, the poster mentions that there will be a “supervised play for small children,” meaning that families were encouraged to attend this rally and would have been part of the audience for this poster.

What does the source tell you about the particular time or place it describes?

This source tells us a bit about the Civil Rights Movement in New York in 1963. The very fact that this rally was being held in Croton, NY tells us there would have been at least some people in that region who supported the Civil Rights Movement and would have wanted to attend this rally. We can also see that there was some degree of cross-geographic solidarity among different branches of the movement, with people in New York gathering to support the Southern Freedom Movement. There would have been interest from people in Croton to learn what was happening with the movement in Mississippi and Alabama, which the two scheduled speakers were planning to discuss.

This guide was designed to help you: