How to Format a Citation

There are two basic approaches to citation:

While the two basic approaches to citations are simple, there are many different citation styles.

What is a citation style?

The way that citations appear (format) depends on the citation style, which is a set of established rules and conventions for documenting sources.

Citation styles can be defined by an association, such as the Modern Language Association (MLA), publisher, such as the University of Chicago Press, or journal, such as The New England Journal of Medicine.

What citation style should I use?

The citation style that you use depends on the discipline in which you are writing, and where, or by whom, your work will be published or read.

When in doubt, ask your professor if there is a particular style that he/she would like you to use.

Where can I find more information on how to cite a specific type of source in a particular style?

The library has style manuals in print and online for several commonly used styles such as American Psychological Association (APA), Modern Language Association (MLA) and Chicago.  In addition, there are several excellent citation style guides on the web. (See below)

Examples of APA, MLA, and Chicago Manual of Style

Source: Gabriel, R. A. (2001). Gods of Our Fathers: The Memory of Egypt in Judaism & Christianity. Westport, CT, USA: Greenwood Press.

Example: Reference within a Journal Article 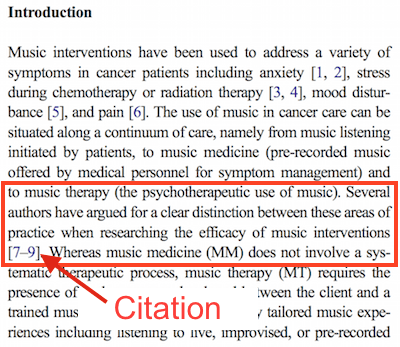