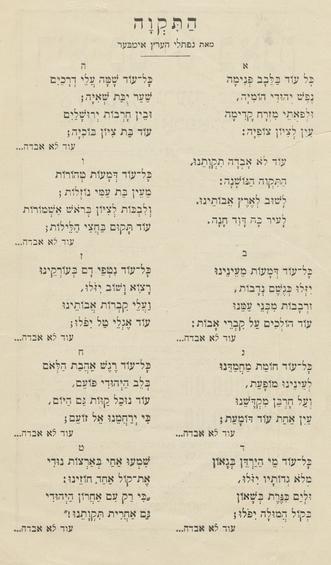 The Harris Collection of American Poetry and Plays includes an array of American Jewish literature in Hebrew, as well as in English and Yiddish.  The Harris Collection is particularly strong for Hebrew liturgical poetry, as well as modern Hebrew secular poetry, drama and song.  This printing of HaTikvah (found in the Library's online collection of Harris Broadsides) was created as part of a promotional brochure directed at Jewish immigrants by The State Bank of New York in 1915.

Other Hebrew language materials may be found scattered throughout the collections of the John Hay Library, particularly in the general collection of rare books (Hay Star).  The Hay Library's holdings include Hebrew language works in Jewish religion, philosophy and ethics as well as mathematics and astronomy, dating from the 16th through the 20th centuries.

History of the Book